Schmuck is the most popular one in English.  The rest of these are funny. 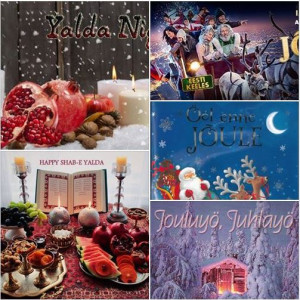 Noteworthy, however, is that the followers of the Zoroastrian (Persian, Iranian) tradition use the same name when celebrating the winter Solstice: they call the longest and darkest night of the year as Shab-e Yalda, or Shab-e Chelleh (Çillə). [Spoiler (click to open)]In Zoroastrian tradition it is considered to be a particularly inauspicious night when the evil forces of Ahriman are imagined to be at their peak. One is advised to stay awake most of the night, to avoid any misfortune. People gather in safe groups of friends and relatives, and share their last remaining fruits of the past summer. The following day (the first day of Dae month) is a holiday. The word Yalda supposedly means 'the Birth' or 'to give birth'.

It is obvious that the Birth of the new Sun is exactly what the name of the holiday, the Yule, reflects.

I'm trying to trace the origin of a peculiar Russian term (rather, a few seemingly related terms) for small glass containers of alcohol-containing liquids (including toiletries). These include fanfurik (фанфурик), funfyrik (фунфырик), fufyrik (фуфырик). The -ik in all the three terms is a diminutive suffix, so you can ignore it.

The question is: have you come across a similar-sounding or somehow related term (including slang) with a similar/related meaning in your language (or any other language)? The focus is on the way the word sounds, less so on the meaning. Please, note that I am not asking about seemingly non-related terms for glass containers in your language (but if you are in doubt, please comment).

And a quick question for those who speak or are familiar with Yiddish. Have you ever come across any Yiddish verb derived from Germ. hofieren? If you have, what does it sound like, what does it mean and is it used in slang?

Looking forward to your replies.

I'm thinking of learning Spanish, but I'm not sure how well that would go given the level of proficiency I have in other languages. I'm an Italian major who has been studying German, too, for years. Roughly how difficult would it be to add an intensive beginning Spanish course? Would it be easy to get it mixed up with Italian? I know I managed to get Italian mixed up with German when I first started Italian, which everyone says is ridiculous, so I'm a bit worried about the Spanish.

So, basically, will Spanish be more difficult because of Italian, or less difficult? And what about French? I might have time to add French, too, but I'm torn because it's at the same time as Yiddish and I'd like to take up another Germanic, oyyy

Additionally, I'm planning on going abroad to Italy next year, and I still want to take German and possibly Yiddish. Has anyone had any experience taking one foreign language in another?

Any advice would be great.

EDIT: Because I can't HTML

Hi,
I'm hoping to come up with a definitive list of the languages my great grandparents would have spoken. They all came to New York after World War I, from the late 1910's to the mid 1920's. I believe they would have spoken Russian, Ukrainian, Polish, Romanian, German (and probably the Bavarian dialect also), Yiddish, Hungarian and, some English. Please let me know if you believe I'm leaving anything out or if anything should be taken away. Below are the list of places they were from and info I have gathered pertaining to what languages they may have spoken. This is just a personal curiosity of mine in researching the linguistic diversity of the country a century ago, especially as it pertains to my ancestors. Any help would be much appreciated.
Best,
Hunter

Mariupol, Ukraine (then Russian Empire)
Hometown of maternal grandfather's father - historically high Greek population, but not sure if non-ethnic Greeks would have spoke Greek - Ukraine became a republic in 1917, before part of Russian Empire

Poltusk, Poland
Hometown of maternal grandmother's parents - Part of Russian Empire, when Poland was taken over after Napoleon's defeat by Russia, 1815-1918

EDIT: I forgot about this thread here with language documents of my great great grandparents from a few years ago.

I grew up in a household where Yiddish words were used for some things, and we always called the end of a loaf of bread the "shplebbik." (I've never tried to write this word down before; I'm just spelling it in a way that looks "right" to me.) I always thought this was Yiddish, but I've been doing some Googling recently and all I can find for the end of a loaf of bread is the word "okraytshik," so now I'm wondering if this was a word someone made up at some point. Has anyone heard the word "shplebbik" used to describe the end of a loaf of bread before, or just "okraytshik"? Does "shplebbik" mean anything at all in Yiddish (or in Russian, Latvian, Lithuanian, or Belarusian, which is where that part of my family lived before they moved to the US)? Google doesn't bring up any results, but it's entirely possible that I'm spelling it wrong if it really is a word. Thanks for any insight anyone can provide.

Does anyone have links to resources on arguments for and against the classification of Yiddish as a language, as opposed to a dialect? I'm writing an essay and all I have are books written by Jewish scholars, so it's not exactly the most balanced set of references. I agree with them on the classification of it as a language, but I think that their arguments would work better if compared to something.

Bold is my emphasis:

Eric Tukewitz, a New York lawblogger, was one of many, many people who wrote about a badly managed legal defense from an inexperienced lawyer representing an accused murderer. The defense was handled very badly, and resulted in a mistrial, and then observers remarked in depth on the website of Joseph Rakofsky, the inexperienced lawyer in question, and on the erroneous impression of vast experience that the website created.

Rakofsky has responded by suing everyone involved, from the Washington Post, who covered the story (in which they quote the judge in the case, remarking unfavorably on Rakofsky's legal prowess), to the American Bar Association, to the large number of lawbloggers who wrote about him.

Tukewitz is just one of the lawbloggers in question, but he's come up with a legal rebuttal to Rakofsky's suit, which he considers baseless: "vade et caca in pilleum et ipse traheatur super aures tuo," which, loosely translated, means "Go shit in a hat and pull it down over your ears" (lit., "go shit in a [knit] hat & let that same hat itself be pulled over your ears.").

I never took Latin, but according to some of the Boing Boing commenters, tuos would have been preferable to tuo.

The phrase reminds me of the Yiddish geh kacken offen yom, meaning "Go shit in the ocean." I could have sworn that there was also a Yiddish expression meaning "Go shit in your hat," but I can't find it via Google. Urban Dictionary says the phrase in English dates from WW II, so it's not inconceivable that it was inspired by Yiddish...

What are some terms of endearment in Yiddish/Hebrew? I've heard bubbeleh/bubbala, any others? I don't speak either language, so help with pronunciation would be great. They don't have to be common terms, maybe just something you've heard that you like. =P

Also, any recommendations for sites/places I can learn these languages for free? Any music/books to help?

Hi everyone-
I was cleaning my grandparents house today, going through some old documents and found several written in languages my great grandparents spoke, but which I do not. My relatives came over from Germany (Nuremberg), Romania (then Bukovina, Austria-Hungary), Russia (Smela, now Ukraine) and Poland in the nineteen teens and, other than a few words of Yiddish their native languages are lost to me. I would love to know what they say if anyone would translate for me. Even the jist would satsify me for now.
Thanks so much for your help,
Hunter