Hello peeps, I hope you can help me with a little thing... it's for a fantasy thriller I'm currently working on, set in modern day (post-2010), where a woman 'sins' enough to unleash the verbal wrath of a certain type of spirits (not ghosts in traditional sense) that knows the truth of humans' personalities and their life stories. Their purpose is to pass judgement on humans by revealing their true character. In this case, their 'victim' is an unfaithful and scorned woman who lies and twists facts for attention and revenge; she gets a kick out of it. One of her shenanigans is to wrongly but knowingly accuse others (anyone, from former lovers to strangers; if she feels badly treated, whether real or not, she targets them mercilessly) of serious sins/crimes that could affect them for life, sometimes even blackmailing them; she also emotionally harasses them with manipulation - one moment she will say she loves them, the very next she will curse them to death. All while portraying herself as a good, smart, and beautiful woman of God who volunteers at soup kitchens and similar - the type that everyone would trust at first glance and not think any ill of.

I'm looking for words to describe such a woman - 'attention-seeker', 'liar', 'cheater', 'narcissist', etc. - in various languages (worldwide, English included; not geographically limited, age or gender determined, nor class-restricted; could be said by Delhi street girl or by a Wall Street man). In feminine form, if that applies. E.g. 'mentirosa' is the feminine form of the Spanish word for 'liar'. More slang-y and/or swear words - 'bitch', 'whore', 'psycho' - are also of interest. Primarily more recent/newer/modern words, but if you know a good old word (pre-1950?) that fits, please do throw it in!

Hi, I've been following this community for a while now, but this is the first time I've needed y'all's help.
I'm a writer with a fairly international cast, and many of my characters are non-native speakers of English. What I'd like to know is what grammatical mistakes would a native Welsh, Spanish, Scottish Gaelic, and/or Arabic speaker make when speaking English, and would a native Arabic speaker have difficulty with non-phonetic English spellings? From what I know of Arabic, the alphabet seem fairly phonetic. Is this the case? 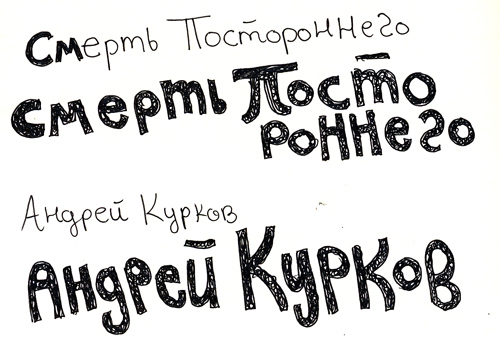 This text is for a design project, with fake book covers in English and their original language. I know basic Russian, and can read and write Cyrillic, but my writing is normally just the standard handwriting style taught at schools. I wanted a scribbly block style for this cover, which is made from brown paper and an old map of Kiev. The English version looks the same, except with Roman letter forms. It's hard to find examples of this type of lettering in Cyrillic, and I have no idea what search term to use in Russian.

1) Is the text readable and attractive looking? (Don't worry about the spacing, I want to change that). Do any of the letters look too strange?

Why is 'cannot' written as a single word unlike all other (shall not, may not, do not, must not)?

I wonder how Hispanophones write (with a pen on paper) the reverse exclamation mark (¡): from top to bottom (as the 'i' character) or from bottom to top?

Hello, here I am again!
I wanted to ask a linguistics-pronunciation question and I need anyone whose mother tongue is Romanian to answer that, or anyone who is really fluent and skillful at that language.
Which of the following (see the list) names would you have difficulty to pronounce?
Or, do you have any idea by yourself, if there is any Italian name you couldn't pronounce easily?
I don't speak any of those languages and in a story I'm currently working on there is a Romanian man who meets an Italian boy and is not able to pronounce his name properly. I want it to be as authentic as possible.
Thanks in advance!

Hello all,
could someone please help me turn around this short text so that it isn't so...clunky?

Not far from the X, in the little, quiet village of Y, lies our vineyard. Here you can
relax in K rooms and Z holiday units, cook in the dining room or on
the barbecue, make use of the Wi-Fi and then enjoy one of the many
local sport activities (Aing, Bing, Cing etc).

The "make use...activities" bit appears especially awkward to me, with my abilities, so I have no idea of how it would seem to a native -or fluent - speaker.

My gut tells me the Old English (Anglo-Saxon) letters and the Old Norse, and therefore modern Scandinavian letters are related. I'm talking mostly about wynn, ash, ethel (i.e. the letters that are now obsolete).
Wikipedia tells me something about Anglo-Saxon runic alphabet but I'm not too inclined to dig through a pile of Wikipedia articles to discover the exact relationship.

Oh, on the topic of runes (which I think will come up) - were Tolkien's runes based on Old English runic alphabet?

I haven't started the Old English at my uni, but I think I'll pick the course on it next semester.

I have a bit of a creative task for our Mandarin-speaking members. I am writing an absurd comedy story and a 'this is my only line' character needs his only line, and I'd like it to be in Mandarin. So: