Hello peeps, I hope you can help me with a little thing... it's for a fantasy thriller I'm currently working on, set in modern day (post-2010), where a woman 'sins' enough to unleash the verbal wrath of a certain type of spirits (not ghosts in traditional sense) that knows the truth of humans' personalities and their life stories. Their purpose is to pass judgement on humans by revealing their true character. In this case, their 'victim' is an unfaithful and scorned woman who lies and twists facts for attention and revenge; she gets a kick out of it. One of her shenanigans is to wrongly but knowingly accuse others (anyone, from former lovers to strangers; if she feels badly treated, whether real or not, she targets them mercilessly) of serious sins/crimes that could affect them for life, sometimes even blackmailing them; she also emotionally harasses them with manipulation - one moment she will say she loves them, the very next she will curse them to death. All while portraying herself as a good, smart, and beautiful woman of God who volunteers at soup kitchens and similar - the type that everyone would trust at first glance and not think any ill of.

I'm looking for words to describe such a woman - 'attention-seeker', 'liar', 'cheater', 'narcissist', etc. - in various languages (worldwide, English included; not geographically limited, age or gender determined, nor class-restricted; could be said by Delhi street girl or by a Wall Street man). In feminine form, if that applies. E.g. 'mentirosa' is the feminine form of the Spanish word for 'liar'. More slang-y and/or swear words - 'bitch', 'whore', 'psycho' - are also of interest. Primarily more recent/newer/modern words, but if you know a good old word (pre-1950?) that fits, please do throw it in!
Okay, let's put it this way... like some 90s children, I grew up listening to Enya. For better or worse, I still totally possess some of her albums, and this one song is one of my favorites but it has also driven me lyrically mad.

However, bookending this section is a repeated set of lyrics that I cannot find anywhere except in a sort of hacky phonetic transcription. I have always assumed those lyrics are Irish Gaelic as well, but if that is the case, why has no one transcribed them properly anywhere? Can any Irish Gaelic speakers here tell whether the multiple-Enya-voice-Borg is singing in that language at the beginning and end of the song?

Furthermore, if it is not Irish Gaelic there, what language is it? Is it even a real language or is it some of the random syllables that I think might also be in some of Enya's other songs? As I sing the phonetic transcription to myself (link also includes an odd theory about the song), I oddly find myself hearing phonemes + melodies that seem to belong in an indigenous American song, given my scant familiarity with languages like Navajo, Lakota, and respective musical structures. But I don't know which is more absurd— my forming that association, or the prospect of Enya trying to sing in Navajo.

Who can help unravel this mystery?

There are lots of people who are fluent in multiple languages because language learning is a hobby or passion for them. My question is about a different group of people. Among your acquaintances, what's the highest number of languages spoken (fluently) by someone who isn't very keen on learning languages or even actively dislikes it?

My maximum is 5. I know someone who grew up trilingual (and still retained the use of all three languages as an adult). He became fluent in a fourth language by living for many years as an adult in a country where it was spoken. Then he moved to a country which spoke a fifth language, and was forced to learn that. He managed to become quite fluent, but was always complaining about it, and ended up moving back to a country speaking one of his other four languages.

I also know quite a few people who are "unwillingly" fluent in four languages. But I'm sure the record is much higher than four or five! 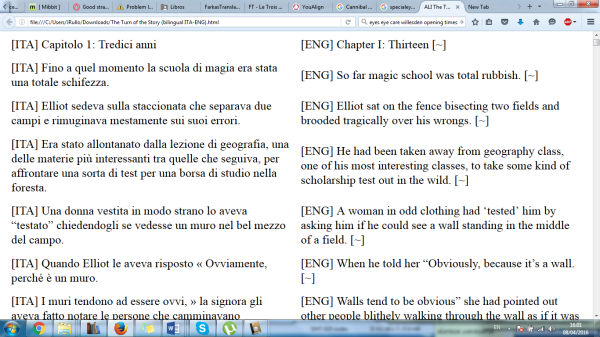 This is a book created with YouAlign. Only thing you need is a file with the text in language 1 and a file with a text in language 2. The website looks at the content and aligns so that it matches line by line (it's meant for translators, but my main interest is in creating bilingual books). I accidentally tested this because my Italian translation was missing a line, so YouAlign just made the spaces between paragraphs bigger so that the texts would stay aligned on its own.

Files need to be smaller than 1MB (try deleting the covers ebooks sometimes have inside if you're over the limit) but other than that and no locked PDFs, it takes a bunch of formats with no problem. Have only tried Latin script languages, it might have issues alignigning stuff like English and Chinese or Russian and Portuguese, for alll I know. Hopefull not :p

If you want to check out some ready made bilingual ebooks, try Farkas. They even have a program to turn the books into ebooks, something I haven't yet figured out how to do with YouAlign generated files (feel free to enlighten me!)

Hope you find this useful :)

I wondered if anybody has experienced something like this: My sister, who's currently 17, has been living in England for a year, immersing herself in English with very little contact with her native Spanish outside the home/skyping/the odd friend. She's now doing As Levels (advanced secondary school for non UKers), which are pretty challenging for native speakers, and although she's doing decently, she's experiencing what she describes as memory loss. She's just now complaining because she wrote the beginning of a piece of homework two days ago and now cannot remember having written it at all (when normally she'd experience 'flashbacks', my experience of reading my own writing as well). My best guess is that this is somehow related to the amount of information, including vocab, that she's cramming into her brain. Her best guess is that she's got early onset Alzheimer.

Hi, I'd like some input from native French & German speakers here. It's for some product descriptions for an online shop. The site I use lets you add translations for any other languages you speak. Most of the other items in the shop are zines in English or art prints, so there's either no point having a blurb in other languages or it's simple sentences about the measurements/material. I have no problem handling the customer service in FR & DE, I'm just not used to the specialist job of writing marketing blurb in those languages and feel these product descriptions could do with a bit of tweaking/removing silly mistakes, and could probably do with being a bit clearer.

In English, a way of remembering which side is left or right is that when you extend the index finger and thumb on your left hand, it makes a the shape of an L, the first letter of left. And I remember right in French because you can make a lower case d (as in droit) by extending your index finger and making a circle with the other fingers on that hand.

I was wondering if other languages have tricks like this to remember which side is which?

One of my friends is an artist, and she's preparing something for an exhibition of science-related art. Her pieces are about the idea of using things like glass-blowing, chemical reactions etc to permanently record breath, something that's normally entirely fleeting. She's been trying to think of a title, but is stumped. All the english phrases she can think of, such as "catching your breath" sound too cheesy, and greek or latin terms like pulmonography sound like medical instruments. She wants something that is eye-catching, but not too pretentious, and that she won't need to explain a million times to people.

Any ideas? I've sent the address of this post to her, so she can see for herself.

I'm thinking of learning Spanish, but I'm not sure how well that would go given the level of proficiency I have in other languages. I'm an Italian major who has been studying German, too, for years. Roughly how difficult would it be to add an intensive beginning Spanish course? Would it be easy to get it mixed up with Italian? I know I managed to get Italian mixed up with German when I first started Italian, which everyone says is ridiculous, so I'm a bit worried about the Spanish.

So, basically, will Spanish be more difficult because of Italian, or less difficult? And what about French? I might have time to add French, too, but I'm torn because it's at the same time as Yiddish and I'd like to take up another Germanic, oyyy

Additionally, I'm planning on going abroad to Italy next year, and I still want to take German and possibly Yiddish. Has anyone had any experience taking one foreign language in another?

Any advice would be great.

EDIT: Because I can't HTML

linguaphiles! I'm an intern at the translation journal Pusteblume. Every so often we try to take on additional language-related projects, and recently I've been trying to put together what I hope will eventually be the Web's Most Comprehensive List of Multilingual Animal Sounds. However, as I've been getting most of the information I have from the internet and don't speak most of the languages listed, I understandably have no way to tell if any of the sounds listed are incorrect. Additionally, there are quite a few gaps in the spreadsheet currently, and certainly languages that aren't represented yet as well.

That's where you come in. I offer you the spreadsheet; anyone who wants to can add things, change things, comment, or anything else. Please feel free to add new languages, but I'd appreciate it if you kept to the animals we have for the time being. If you want to be credited for your help, leave your name or username in the source sheet. And if you have any questions or comments, leave them here! Thank you so much. :)
Collapse