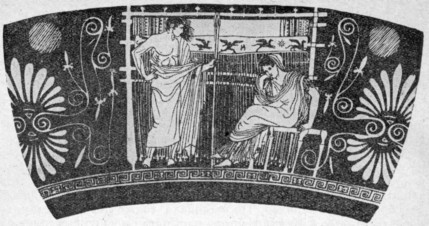 ...Like Penelope, Helen is described as weaving and spinning wool, common tasks for women in the Homeric world. Also in an episode of the Iliad—in Paris’s home in Troy—she was working on “a large web” (megan histón) upon which she was embroidering the events of the war the Trojans and Achaeans were waging over her (Iliad 3.125–128). We can imagine Helen’s weaving as comparable to the 11th-century Norman Bayeux tapestry, which (according to tradition) William the Conqueror’s wife, Mathilda, personally fashioned, depicting scenes from her husband’s war on English soil.

Incidentally, the huge dimensions of Mathilda’s tapestry—70 metres long by 50 cm high—lead us to understand why the suitors found it normal (Odyssey 19.151) that Penelope worked three whole years on her famous web, also defined as “large” or “oversized” (19.140).

Helen and Penelope on the one hand and Mathilda on the other, although they are separated by a time abyss of thousands of years, show us that it was common for high-ranking women in the north to spend their time weaving depictions of important stories, a custom that could have been prevalent for almost three thousand years. Among those ancient peoples, the memories of the past were preserved not only by bards’ cantos, but also by noblewomen’s weaving, suggesting a relationship between the Homeric term histós, meaning “tapestry,” and our word history (historiē in Greek).