How do you translate
Ты что нерусский что-ли? (means "are you stupid?", lit. "Are you not Russian?")
into English, German, Italian, Japanese, Chinese and other languages?

I found one passage like this in a book on the other day;

Most girls like to go on diet, but they are more likely to get ill than otherwise they would be.

One (famous?) professor translated into Japanese ike this;

「女の子は大抵ダイエットをすることを好むが、彼女たちは他の点でそうなるであろうよりも 病気になる可能性がより高い。」which means; 'most girls like to go on diet, but they have more possibilities to get ill than that of the different things they might get'.  So the translation was not clear.  What is the real meaning of the passage?

Also there was another translation done by the same professor.

She had herself pushed onto the street in her wheelchair.

It said「彼女はみずから車椅子を押して通りに出た。」which means; 'she managed her wheelchair by herself and went out to the street'. But I think it is a causative verb and it would mean that someone helped her and she was pushed in a wheelchair down a street. Am I wrong?( but the translation said she was alone and did it by herself....it sounds weird to me.....)

But someone said that it is one of the famous writing from Virginia Woolf and after studying him deeper, it is natural to translate like that or something….

"Will you marry me?" is not the only way for a man asking for a woman's hand in marriage.

In Japan, a Japanese man often says one of these as a means to propose:

毎日、みそ汁を飲みたい I would like to drink miso soup everyday.

In Singapore, a Singaporean man may ask, "Shall we get an HDB flat?" to propose.

HDB is government flat, and big subsidies are given for first time home owners, usually the newly-married.

Are there any interesting ways to propose in other cultures/languages? 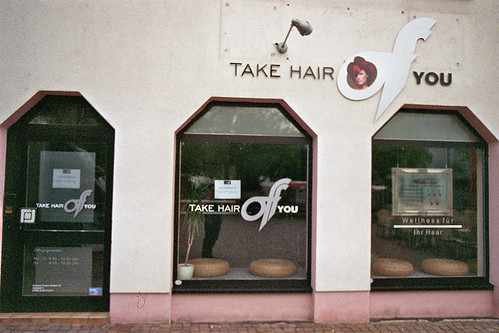 Hairdresser's shop in Zweibrücken, Germany. After seeing this, I had to have a seat outside the Italian café next door, where I cried, quietly, into my coffee for a while. (I am a sensitive soul.) Then I went and took the picture.

Strangely, I think I could have forgiven "We Take Hair Off You".
Collapse