I'm looking for a place to find large amount of Spanish TV, particularly shows from Latin America. Things like documentaries and news shows would be ideal, but I'll settle with telenovelas. Are there any good sources online for this stuff?

Sometimes CNN poops out when you try to link to a specific video. If it does that to you, you can try looking for the video under the 'top stories' or 'most popular' tabs.

I am teaching myself German as a sixth language by means of two course books and an audio course. I was wondering if anyone knew about a (preferably free) online German video course.

Here's a little sheet of paper I found taped to a wall in a store in San Pedro de Atacama, Chile.

Who needs the IPA when you've got zertisix?

"One possibility is the plethora of localized “lishes”, such as Chinglish, Hinglish (a Hindi-English hybrid) and Spanglish (an English-Spanish hybrid) could branch so far from English, they become mutually unintelligible tongues sharing a common root, much as Latin did in Medieval Europe."

Is this an actual plausible future for English? What would future sentences in these languages look like at the beginning of their separation?

Standard English: Please do not sit on the floor.
Spanish-based: Plis favor no sitas on de sueflor.
Chinese-based: Very must not to sitting on floor.

What about later on?
E: Please don't sit on the floor.
S: Plifór no site eno suéor. (for some reason, this reminds me slightly of Catalan)
C: Ver byao to zuong zain dixior. (an interesting question to ask would be if, along with the meshing of Chinese and English vocabulary, would tonal pronunciation appear in Chinglish?)

Spanglish seems to be more of a mixture of vocabulary than grammar warping, as is Chinglish.

I was wondering about the following sentence (from the book "Before They Are Hanged" by Joe Abercrombie):

"He is not fit for battle that has never seen his own blood flow, who has not heard his teeth crunch under the blow of an opponent, or felt the full weight of his adversary upon him."

Since I'm not a native speaker I got confused by the first "that" in the sentences - is it referring to "he"? Is that an old way of saying things in English? Up to now I have not seen anybody using "that" instead of "who" but that is (for me) the only way the sentence would make sense.

Thank you for any input on this case!

Did the Latin cursive f derive from the Greek lowercase φ? They look rather similar, except the lowercase f is taller than φ.

Anyone care to take a guess at the second item on the list? Bus station restaurant in Puno, Peru, if you're curious and if it helps you to guess. 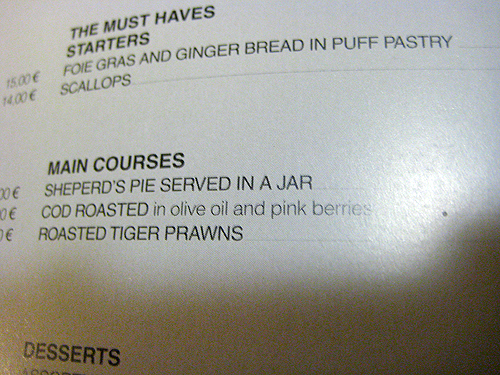 I though you'd enjoy this piece of menu mis-translation I saw in Lille yesterday. Anyone care to guess what the original (perfectly reasonable) description was in French? (and yes, the french gingerbread is a gingery spicy bread, but not QUITE what gingerbread means to british english speakers, which is who they were aiming the booklet at)
Collapse