This earlier entry: http://community.livejournal.com/linguaphiles/3162089.html was asking about the use of the phrase 'come with'.

I thought about that, and now I've had a follow-on thought and would like to know if what I'm about to describe is a speech quirk of mine, or if it's something that other people recognise as well.

Let's say that today is Wednesday the 1st, and I'm trying to make plans for Saturday the 11th.

I'd say that it was just a me thing - but no one's ever been confused when I've specified days like this.

I'm moving to Ankara at the end of the summer and I need to learn as much practical Turkish as I can in the next three months.

Generally I'm very text-dependent when learning a new language and I know I'll have to get over if I'm going to cram as much knowledge as possible into my brain this quickly, but I'd still like something that has both a spoken and a written component. Ideally, there would be a course that transcribed all of their recordings and included a beginner's guide to grammar and structure. Is that asking for too much?

So I suppose I'm asking for recommendations. If you've managed to teach yourself Turkish, please tell me more about which resources you used. I believe my local Borders carries the "Teach Yourself" series for Turkish; any good or bad experiences with these?

Thanks for your help!

Really fascinating article.
http://www.newyorker.com/reporting/2007/04/16/070416fa_fact_colapinto
Only the abstract is available online, but it was in an issue from just a week ago. You might be able to find it at some stores or at the library.
How exactly does one say 4-20 (referring to the day) in French? Was talking with a friend and we paused for a minute at the awkwardness of letting slip the words, quat'-vingt. Because that means 80 to us.
i live in ~canada~, not going to france, lol. but thanks for the responses nonetheless =D

1. what's 9/11 in french? the terrorist attacks, i mean.
2. what's 911 in french, as in the emergency number? (i live in canada.)
3. when giving my phone number, should i say each number individually? in english i might say "seven sixty". in french, would it always be "sept six zero"?
4. for room and address numbers: are they always read as full numbers? in english i'd say room one-twelve, or one-twelve crescent street, but in french it's been cent-douze whenever i've heard it.
5. is cent-douze hyphenated? it's 'la salle cent-douze', right? i'm not an aural learner at all if you couldn't tell... =D
6. i recently found out you don't pronounce the Q in, for example, "cinq semaines". does the pronunciation of any other numbers change when describing quantity?
Hi guys! Today I have a text-message for decryption :)

In a text about the history of a city, how do you spell "streets," "squares," etc. in placenames -- with a first letter in capital or not? And do you use definite articles?

Also: cathedrals -- first in capital or not? St.Isaac's Cathedral?

P.S. I'm interested in the English language rules, of course.
Someone posted the following as part of a group of items she was giving away, and I'm curious to know what it says. I see a character that looks like dragon and another that I believe is weather-related (rain or sky?), but that's all I recognize. Please explain this (Chinese?) star to me, linguaphiles. 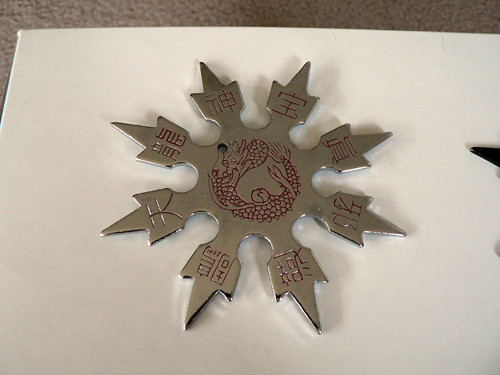 I'm curious, why is pineapple "ananas" in both french and italian? And grapefruit? French "pamplemousse" italian "pamplemo"
I ask the forum for their ideas or knowledge.
Thanks!
Collapse